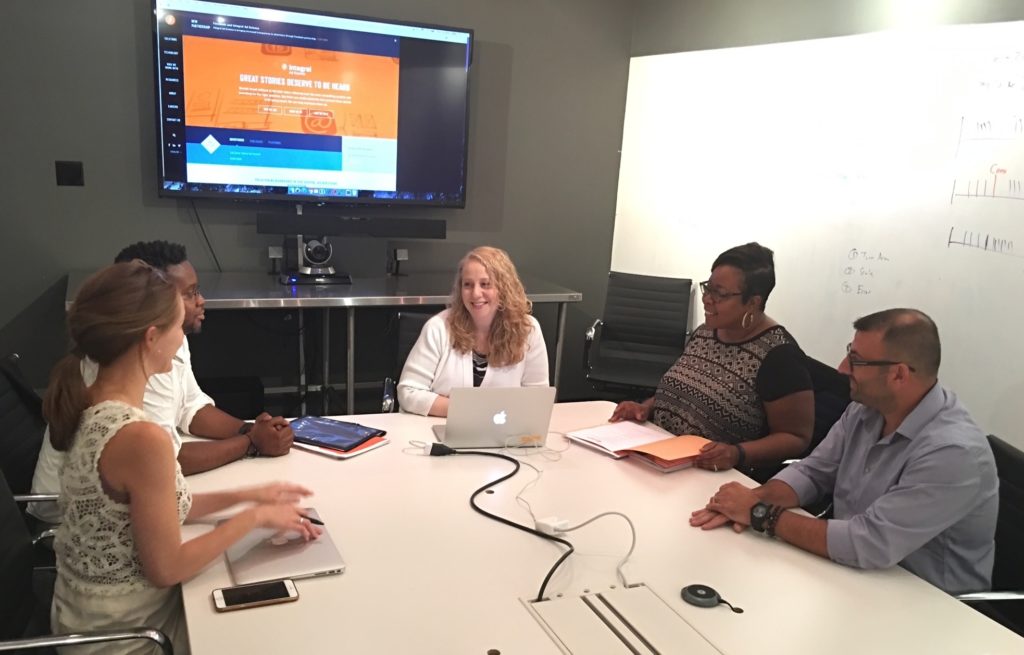 Arden Schneider, SVP Human Resources & Facilities at Integral Ad Science (center in image), has helped NYC-based Integral win multiple “best” workplace awards since she arrived in 2014, including Crain’s New York Best Places to Work in New York City, Best Companies to Work For in New York State 2016 and Ad Age Best Places to Work in the US 2015.  No small accomplishment as the company has been doubling—in every respect—for the last three years. Here are some of her insights on how they’re doing it and why it matters. (Accelent placed Arden in 2014.)

“In my mind, the culture was already great. How could we keep it great?”

Accelent:  When you arrived at Integral Ad Science, what was the situation, what was the challenge, and what did your CEO ask of you?

Arden:  The opportunity was to build on the foundation that had been laid (e.g. one HR professional reporting to the head of Finance).  The challenge, which was exciting to me, was not only to build it, but to build it in an environment where we were growing like crazy in terms of revenue and hiring. Really, there were multiple challenges: How do you make sure the organization doesn’t lose its culture while adding so many new people, and processes, and trying to become more disciplined? How do you keep the culture that you have? In my mind, the culture was already great. How could we keep it great?

Accelent:  What advice would you give an HR leader arriving into a similar situation? What are the top things to do in a fast-scaling company in terms of making sure you’re protecting what’s valuable about the culture and then building on it?

Arden:  Well, the first thing you do is make sure you have the right conversation during the interview process so that you know whether the organization is interested in providing an awesome culture for employees. If the organization isn’t interested in doing that, then nothing you do is going to work. You have to have buy-in from the top. That’s first.

The second thing you do when you arrive is listen and observe. Not forever, but you make sure that you understand what the environment is, what makes the people tick and what makes the culture great (hint: it’s the people) and also what’s starting to creep in that you might not want to creep in. Then you start your action planning, but you never stop listening to employees.  You do it formally, and you do it casually. And you start building your department. You figure out what sort of HR professionals you need in the organization, what functions within HR will enable you to scale, and that can differ from company to company. And if you’re global, it’s going to be different than if you’re in one location in New York City. We were already global with plans to keep expanding; I knew that and that was incredibly exciting to me. It was all incredibly exciting to me.

I think those are the first things you do, besides, of course, making sure that your comp and benefits are up to standards, or maybe above standard, compared to whoever you are competing with for talent.

Accelent:  In this process, what were and are the biggest challenges?

Arden:  It’s probably two sides of the same coin. It was attracting and hiring top talent, which is difficult. They talk about the tech wars for talent and it’s true. The challenge is adding all the people you need to add, but the other side of the coin is keeping that amazing culture when you’re adding all of those people. Not that anybody comes in looking to ruin your culture, but people come in after having worked in different environments and different industries, and it’s just making sure that you have the mechanisms, both formal and informal, for bringing those people on board, making them feel like they’re part of the fabric of the company in an effective way, so professionally and personally, they feel at home.

Accelent:  What did you learn in the process?

Arden:  First, it was a new industry for me. I’ve always been in tech, so working with engineers, data scientists and product folks, that was not new to me. But the other side of the house, client services, sales, and marketing in an ad tech environment was new to me, so that was great. I got to learn a new industry.

Accelent:  Has your experience at Integral reinforced anything you’d known before about the key issues in creating a top workplace?

Arden:  I think a lot of times, the mistake companies make is thinking that compensation is what keeps people engaged. You obviously have to be competitive, and maybe you decide that for certain hard-to-fill roles, you’re going to pay above market, but it’s very definitely more than that. At Integral, it’s working in an environment where you’re not afraid to take risks and you’re not afraid to push the envelope. It’s a laser focus on customer satisfaction and on being a thought leader in the industry. It’s understanding that technologists are incredibly creative and need an environment in which to be creative. And it’s collaborating with amazing colleagues on awesome projects.

I’m never happier than when I see a group of employees sitting in the kitchen together, laptops open, eating lunch and talking about work, not because they have to, but because they want to. Or when people stay late to play video games together, or play on Integral’s various sports teams together. What HR professional doesn’t want people to want to come to work, to enjoy and learn from and have fun with their co-workers?

Accelent:  How does a great workplace translate into business results?

Arden:  You want to retain your top talent. You want everybody to be top talent. You need to provide development opportunities to the point where employees want to stay and you want them to stay.  And that’s how it affects productivity and bottom line, when you have a seasoned, tenured, skilled and engaged workforce. Basically, HR should remove obstacles and facilitate professional growth, and that leads to a high performing organization.

Want to learn more about Integral Ad Science, their senior leadership or how they have been recognized as a top organization for which to work? Visit http://integralads.com/about/news/

About the Author: John Boehmer

John Boehmer is Managing Director of Accelent, Inc., and a 20-year executive search veteran with a unique point of view about identifying, acquiring, and integrating executive talent.